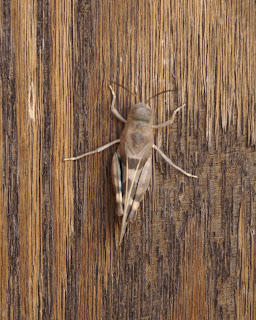 US Highway 180 runs from the south rim of the Grand Canyon east to Hudson Oaks, Texas. Just about in the middle of this span is White's City, home of White's City Resort and Water Park. The resort consists of a couple of motels, including the Best Western Closest to the Caverns, some water slides, the Velvet Garter Steakhouse and Saloon (which sadly was closed by the time we got there) and Jack's. With our stay at the Best Western, we got free breakfast at Jack's. One cool thing about Jack's is whatever your choice of breakfast (eggs, pa 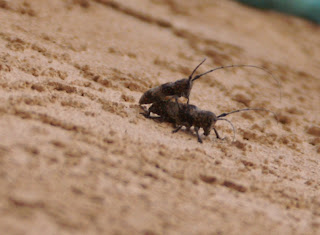 ncakes, cold cereal, or english muffin) it comes with 2 strips of bacon.

The other cool thing was the bugs. Several species of grasshopper greeted us as we walked through the parking lot, but I especially liked the one on the front door. The mating beetles on the wall just under the porch light were also a very nice touch. I found this injured mantis in the parking lot at the motel after breakfast with bacon; I 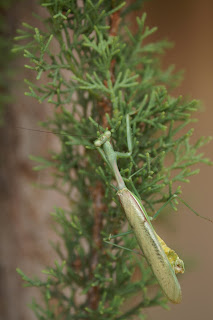 picked it up and let it go on a nearby cypress. It expressed what seemed like gratitude by grabbing onto the branch and pulling its battered body into the cool green of the tree.
Posted by vanessa cardui at Thursday, September 06, 2007