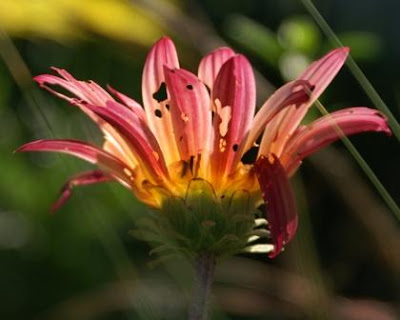 The nymphs of the oh-so-common to my yard forktailed bush katydid (scudderia furcata) love to chew holes in flower petals. Last October I bought a couple of these newer arctotis hybrids to give some oomph to the old purple African daisy patch. They had blooms on them at the time, but as is typical for perennials you might buy in bloom, the flowers faded and the plants hunkered down and grew strong roots over the winter.

The purples have been blooming for a couple of weeks, and so I've been waiting and finally one of these spectacular purpley/orangey/yellow ones (could be described as resembling a sunset sky!) opened but at least one katydid beat me to it before the sun had even risen. Yes these wee bitty nymphs are cute, however, it remains to be seen whether the African daisy patch will be big enough for both them and me. 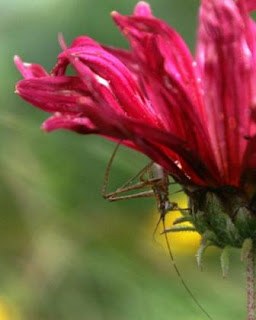