March of the Chenilles 2010 Part Deux 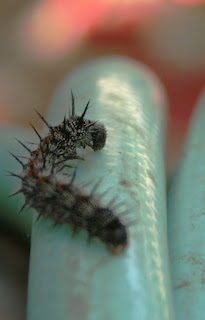 On April 3 and 4, while the mourning cloak butterflies (Nymphalis antiopa) were eclosing, another batch of caterpillars were marching toward their destiny as pupae on the walls of my house and other suitable vertical surfaces in the neighborhood. 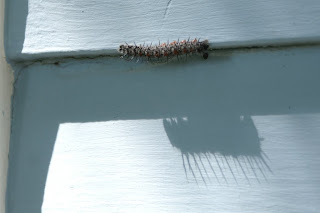 There were a few detours along the way. One of the caterpillars seemed taken with my coil of

hose; another one travelled horizontally along the house siding for a long while casting a spiky shadow as the day grew late. Eventually, by the next day, the caterpillars were pupae hanging off the house like little fruits. There were six of them that I could find, which is more than I've seen at one time. I was thinking t 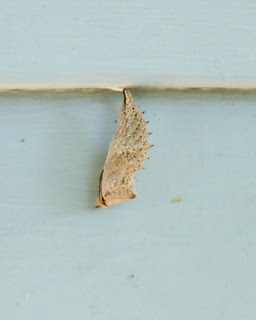 his is a good year for mourning cloaks.

The next morning, my daughter found a partially-pupated one laying on the brick patio between the house and the office. This 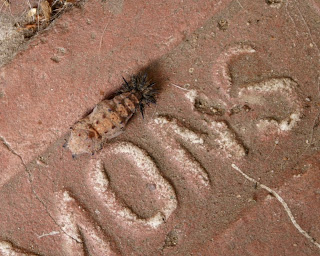 particular caterpillar must have been unusually motivated to not pupate where it pooped, to have crawled all the way around the house and across the driveway and patio, passing up perfectly goo 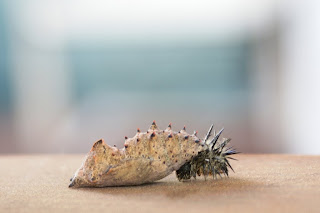 d vertical surfaces and in the end fail to find a place to attach before the unstoppable pupation molt occurred. It wriggled when I picked it up, an uncomfortable parody of being alive.


So I kept half an eye on the healthy pupae on the house, figuring the butterfly transformation would take over 2 weeks, as with the previous cr 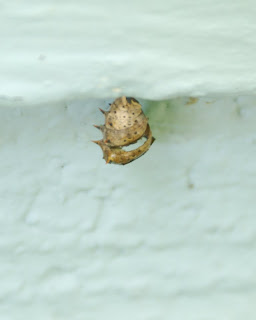 op of pupae. On March 14, however, I noticed the pupae were gone. Well, not completely gone, anyway not all of them. A few had a couple segments left hanging as slim evidence of the apparent predation of the entire crop.


So much for the strategy of not pupating where you poop.

I suspect the predator of these mourning cloaks to be the wrens, probably Bewick's wren Thryomanes bewickii. In this terrible photo you can at least see the white stripe across the eye which is a distinguishing mark of this species. When they aren't singing from a tree top or another high place, these cute little guys are usually squirreling through the underbrush, digging in the dirt, climbing up and down branches, all in search of insects and spiders to eat. I noticed them picking adult carpet beetles off the flowers, and I attribute our lack of scale insect to the fastidious grooming these birds give my 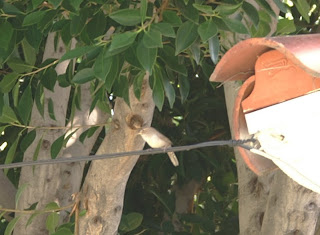 shrubs. It seems there are more of these birds than ever before, maybe a sign of a healthy bug-populated environment to support them. Anyway, it's sad to lose the mourning cloaks but I won't miss the carpet beetles.


A wren sings a beautiful complicated song from the power line overhead as mourning cloak butterflies glide past toward the melaleuca blossoms.
Posted by vanessa cardui at Saturday, April 17, 2010

Once again, I am amazed and delighted to find you are blogging about stuff that I am currently interested in and/or observing. Maybe it's because in spite the wide worldliness of the Web, we are practically neighbors, geographically speaking.

Anyhoo, the bird! This Bewick's wren might be the same kind of unfamiliar bird I've been seeing hanging around my back yard for several weeks, singing a song I was not familiar with. In the morning I will compare online recordings of the song to what I'm hearing outside. (mostly in the telephone wires right above my Chinese elm, I might add)

What happened with the guy who pupated on your brick patio?

I rigged it up on a piece of cardboard (Morbid!! sayeth my daughter when she saw it) so it could hang in about a regular position, to see if gravity would help. It didn't, the shed and head are still attached. The pupa is now in a plastic bowl on my garden bench. Do you think it might develop? Maybe I'll find a way to hang it (glue?) and see if anything butterfly-like comes of it.

From what I can see, the pupa looks complete, just the old skin is still there. Can you tease it off with a toothpick?. If it's really stuck on there good, I would still try to attach it to a twig or something so it can hang head down. I once reattached a fallen monarch chrysalis to a twig with spider silk. You poke a stick into a spider web and use a circular motion to wind the silk around the stick. Then you wind that silk around the point where you are going to attach the chrysalis to another twig. You're kind of lashing the chrys. to the stick with the spider silk. (Does that make sense?)