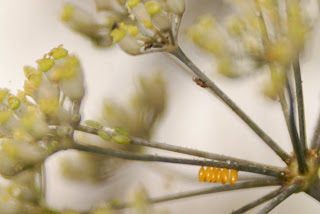 beetles on display, along with their primary food source, all in one feathery 3D environment: the bronze leafed fennel. I planted this just last autumn from a tiny little thing, and the Foeniculum vulgare 'Purpureum' has since grown to a six-foot plus emporium of insect food.

There were two species 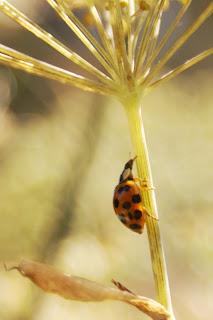 of ladybird adult present. Asian ladybirds (Harmonia axyridis), seen here in one of their many black on red spotted color variations, were most often found with their heads inside a leaf axil. Finally I did find an active one, trucking up a flower stalk. The spotless ladybirds, Cycloneda sanguinea, spent their time crawling over the bloomed-out umbels searching for and 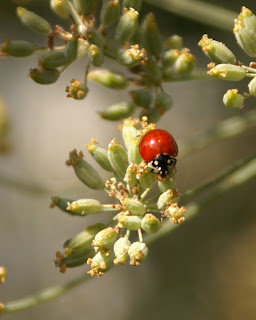 Among the flower umbels seemed to be a favored spot for egg laying as well as hunting. 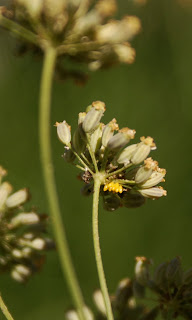 You can see some aphids in one of the egg photos, like low-hanging fruit for the soon to hatch larvae. Both of these beetle species' eggs are bright yellow-orange so no idea which species these are.

There was a cluster of 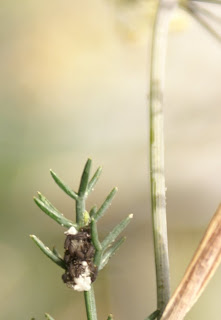 just hatched larvae, very tiny and all black. A lot of ladybird larvae are black when they hatch. The shells of the empty eggs are white. The older larva is H. axyridis by its markings: mostly black with a broad orange stripe along each side. Last but possibly least, this pupa has already emerged and hangs alone and empty again among the umbels.

The fennel could have go 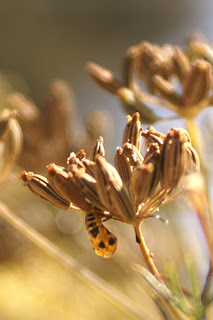 tten a bit large for the parkway strip planting, except I poked a wire trellis right next to the plant (parallel to the sidewalk) and tied up the largest stems so they don't flop out of bounds as they continue to grow and provide habitat for ladybirds and their prey.
Posted by vanessa cardui at Thursday, September 02, 2010

I'm so excited that you've now taught me about ladybird eggs! I'll have to keep an eye out to see if I can spot some.