Time has passed in chrysalis-watching land, and while it has taken more time than anticipated for the monarch caterpillars to complete their pupation, still time and sunshine are free when you're a butterfly. 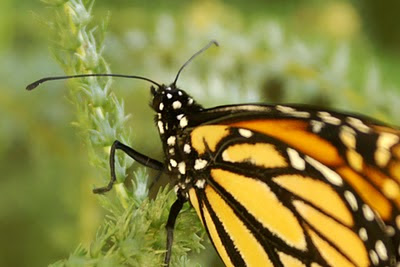 I've kept two eyes on the two caterpillars in this post that I observed pupating back in mid-January.  Caterpillar #1 pupated under a leaf of the big Phlomis purpurea while caterpillar #2 attempted the same feat but fell into the phlomis duff and was rescued by me.  #2 spent its pupation suspended from a bamboo skewer on my back porch or, when the winds got rough it spend timely safely in my house or office.

Caterpillar #2, The Fallen One, completed its transformation to an adult monarch butterfly today.  The photos in the slide show follow its progress from 2/9 the day before eclosure through 2/11 when the apparently viable butterfly flew off.


Notice the dark marks on the pupa and the pupal case in the first photos. This pupa had apparently sustained some damage possibly when it fell; the dark marks seem limited to the outer layer and remind me of scabs. When eclosure is very near, the outer covering of the pupa looks like it has separated from its contents. I missed the actual emergence since I have to work from time to time. By the time I found the emerged butterfly, it had crawled around the edge of the box I had it suspended in. I had intended to put the pupa out in the shrubbery when it started to clear . . . about the stage of the first slide show photo. We had high winds that day so I decided to keep it in a protected area using this deeper box so the butterfly could hang unimpeded. By 4pm the wings are rigid; in the photo you can see a drop of meconium being expelled. 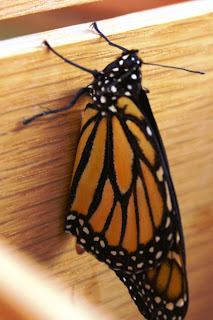 The next morning was still, sunny and warm so I decided to move the butterfly out from under the patio cover into the sun. Even so, with all that warmth it took until midday for the butterfly to take flight. After a short hop of a first flight, over to a nearby euryops shrub, The Fallen One spent a few minutes flexing its wings then suddenly flew up and away over the roof of my house. 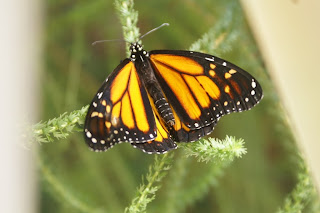 A lot of sources informed me the pupal stage of monarchs lasts 10 to 14 days.  Obviously, this is not always correct.  The Fallen One's pupation stats:
From J to pupa took 3 hours
From pupa to eclosure took 26 days
From eclosure to flight took 25 hours 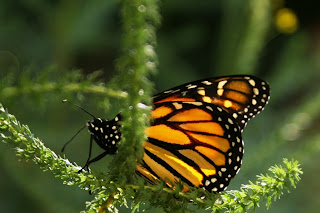 I glad I could assist this one butterfly in its transformation. 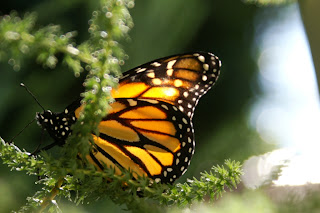 Darn work getting in the way of watching butterflies! I'm fascinated by the slide show- it's such a beautiful, miraculous thing to witness!