Spiders I Have Seen Recently 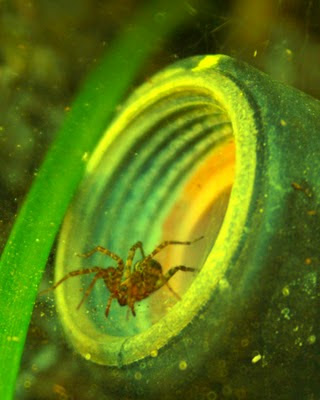 Spring is a slow season for spiders anyway; the adults typically die off over the winter and the tiny spiderlings are well, tiny, and not active when it is cold out and did I mention they are tiny?  This year spring has been colder (and wetter) than usual and fewer of the spiders' prey items are in abundance or active, so the ripple effect is there are few spiders out and about, at least as far as I have noticed. 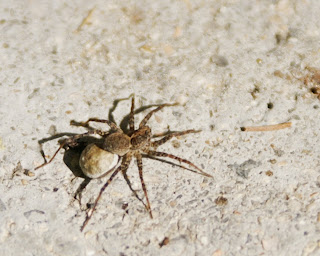 Nevertheless, on the occasional sunny day, I found an interesting species climbing around an old concrete valve box in the deeps of the back yard.  This is a female thin-legged wolf spider (Pardosa sp.) carrying her egg sac around with her as they typically do.  I saw two of these females in the same location. 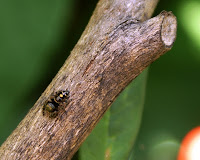 This one jumping about on the Calliandra californica is a young Bold Jumper, Phidippus audax. 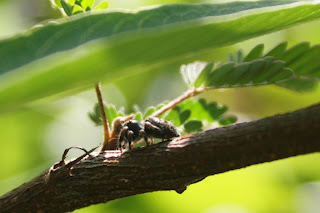 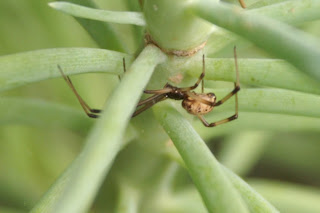 A brown widow (Latrodectus geometricus) made her appearance among the senecio leaves one day.  This potted senecio is on the front porch, so I imagine my leg brushed Dangerously Close to this spider before I noticed she was there.  I snapped a few photos, went about my business for a short while and then noticed she was gone.  I have wondered whether my camera's autofocus sensor emission (infrared in my case) disturbs my arthropod subjects and causes them to move on in many instances. 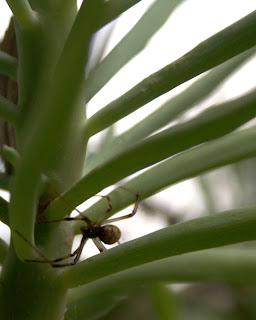 At the top of this post is a color adjusted (Green!) photo of a friendly neighborhood funnel web spider, Hololena sp, that has made her home in a seldom-used hose nozzle.  Here is the original normal color photo. 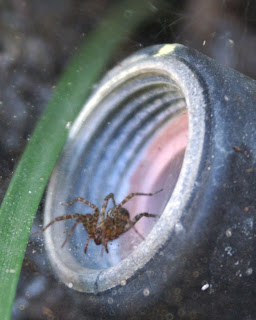