Things in the Fennel 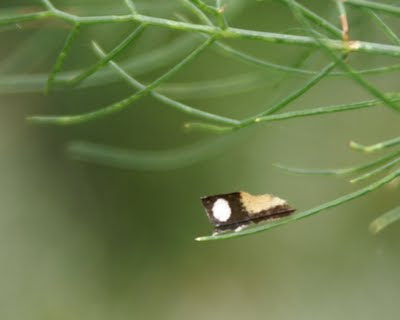 It was one of the final days of the legendary April-May-June gloom of 2011 and I was strolling past a fennel plant (Foeniculum vulgare) that overreaches the pathway with its vulgarity, when a white/orange/black thing of an unusual shape and size caught my eye.  Looking closer I saw it was a bit of the trailing edge of a monarch butterfly wing.  Yay, great find! I thought as my normally down-glancing eyes luckily decided to move up the fennel plant and so happened to notice another white/orange/black thing that was more interesting: 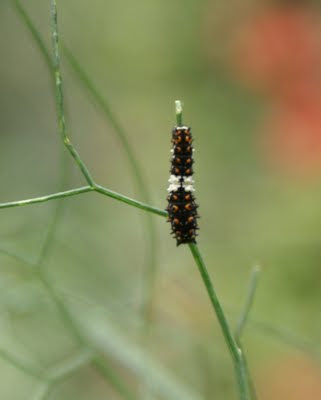 Oh My Gorsch . . . it was a small caterpillar of the swallowtail persuasion.  I thought this because the overall, out of the corner of the eye first impression was strongly bird-dropping-esque bringing to mind the caterpillar of the Giant Swallowtail.  Checking my resources later confirms this to be a second instar Anise Swallowtail larva, Papilio zelicaon.  The fact it was feeding on fennel, possibly the most utilized larval food plant for this species in this area, of course supports the identification.  Very exciting to find this new species breeding in the yard; turns out there were four little ones working on the annihilation of the upper portion of this fennel plant on this particular day. 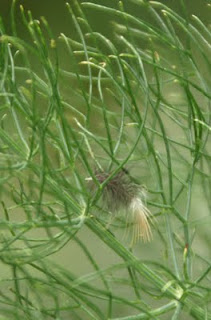 Also found among the feathery reaches of the fennel were a tiny down feather in a similar color scheme as the wing bit and the caterpillars . . . maybe a towhee feather or maybe that of a house finch.  I recently followed a towhee (Pipilo crissalis) as it walked down the sidewalk in front of my house.  It was a very odd feeling. 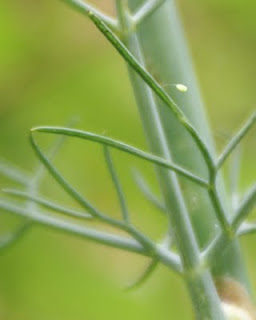 Then there was one green lacewing egg.  This one is a bellwether of the coming tide of lacewing eggs that will proliferate on the tips of vegetation as soon as the weather warms up and the prey populations explode.

And there was also a fennel inflorescence just opening up.  These graceful flowers open slowly and dramatically in the languid cool sun of summer 2011. 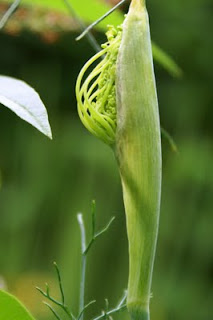 What became of your caterpillars? Too often, those little guys get carried off by wasps.

Yes I was worried about the wasps, especially given the numbers of them attracted to the fennel. But wait, there's more . . .