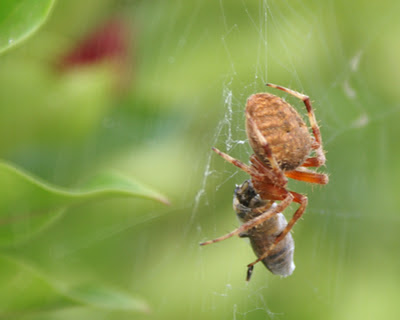 It's Halloween and what can be scarier than a real live spider . . . NOT. 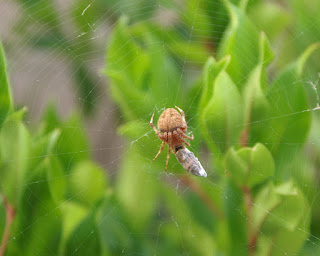 Actually Mr. Cardui is afraid of spiders.  I think he doesn't trust them.  This particular one, a spotted orb weaver Neoscona crucifera, has built her web on the north facing side of the prunus caroliniana hedge for weeks, positioning herself in the center of the web right about eye-level to an unusually short blogger.  For some reason, yesterday afternoon she had moved two of the web anchors and enlarged her web so it now spanned from the hedge to the house, a distance of about 12 feet.  Mr. Cardui blundered face-first into web as he was putting away parts of his scary troll costume from the weekend's festivities.  Ironical, isn't it?

These spiders are out on the web during the day; this one scurried up to the center of the bridge thread of her web to survey the damage . . . the bottom anchor in the middle of our driveway was severed, and then the spider-fearer detatched the anchor to the house as well to discourage the spider from building web where people like to walk.  It worked.  Late last night I checked to see where she was: in the center of a beautiful new perfectly flat and shining web on the north side of the prunus hedge just about eye-level to flashlight-wielding bug nut.

Here is the orb weaver's web from a couple days ago, glowing in the sun.  It's interesting how this one has an bend in it; the spiral is not all in one plane.  Maybe this was a repair job on a partially damaged web. 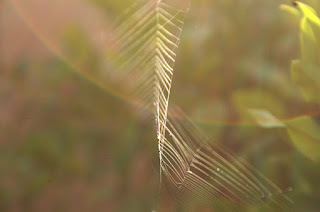 Happy Halloween and don't let the spiders scare ya.

I watched your masked face
--too huge to eat-- ruin my web
and you said Oh ick.
Posted by vanessa cardui at Monday, October 31, 2011

I LOVE that haiku! I think it's cheese free. And a good dose of perspective. =)

LOVE their webs!! and the fact that (some of the orbs) only come out at night! moon worshipers...like me! :)

I shared your haiku with many friends- it is too clever and funny not to pass on to others.

Hope you got to watch Mr. Cardui waving his arms around.

Mr. Cardui recovered from his spider trauma. He's the greatest, doesn't get too mad when I snicker at his arachnophobia.