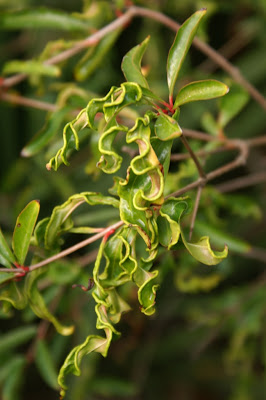 Back in March when I noticed the spiraling leaves on the pomegranate tree I searched the internet and print sources for information on what might be causing the deformed leaves.  I found nothing definitive; also not anybody else wondering about the problem.  Said it looks like insect damage, and shelved the question.

A little while passed, the leaves were still spiraling, and I finally found a reference to Aceria granati, the (apparently if this is indeed the culprit) aptly named pomegranate leafroll mite.  I meant to post this update but didn't get a round to it. 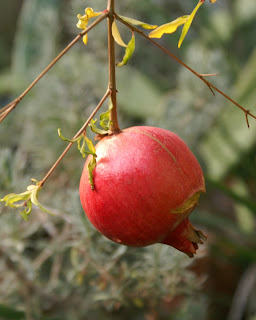 A fellow pomegranate grower here in So Cal inquired the other day about the twisted leaves, since they too have the same thing on their punica granatum.  And so I am given the impetus to post this update on the pomegranate.  It still has spiral leaves; about 1/2 of the remaining (some has seasonally dropped) foliage is spiraled.  The tree produced few flowers this year and only one fruit; bear in mind this is a p. granatum nana and so doesn't bear a lot of fruits.  Still, I will say there was a definite reduction in productivity.  My plan is to prune off the affected leaves now before they drop; allow the tree to further defoliate for winter; watch for infestation early spring; and treat with neem or insecticidal soap if there is mite sign.  Chemical use against mites often gives a bad result because the pesticide kills off predators that would otherwise feed on the mites; also mites can become resistant to chemicals.

University of California IPM guidelines for spider mites (different but possibly similarly controlled organism) suggests that water stress and dust can set up a plant for mite infestations.  So I will probably supplement water the pom in spring and spray off the leaves if there is sign of trouble with aceria granati.
Posted by vanessa cardui at Thursday, December 01, 2011

Some more information about Pomegranate Arils

Hi there, thanks for the update. I havent had a chance to check back on your post since the last time I left you a comment. I am really glad you figured out the cause, I will try your tips and see if it helps our plant.

Having same problem. Flower dropped off also, no fruit. Will try treating with insecticidal soap.

Thanks--I got same thing here in Virginia. Will check back next season to see how we all did to fight it.