Frodo Lives, Moth Does Not 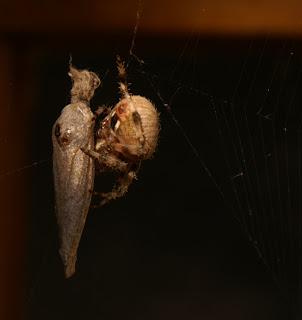 I just finished watching LOTR: Return of the King for the umpteenth time. Soon after disk two opens we find Frodo wrapped in a neat package by the giant spider Shelob. Frodo's loyal companion Sam, gardener though he is, has forgotten that spiders do not kill their prey outright, and thinks Frodo is dead. This picture reminds me of what would have happened in that part of the movie if Sam had not overcome his despair, defended Frodo's stunned body and defeated the spider. This is an orb weaver, Araneus gemma, that has taken to weaving her large web just outside my office door so I have a fine view each morning if she has captured any prey. The unfortunate victim here was some sort of moth, which has been sucked dry by the spider. Luckily for LOTR fans, Frodo did not meet this same cold fate and went on to see to the destruction of the one ring.
Posted by vanessa cardui at Sunday, October 07, 2007