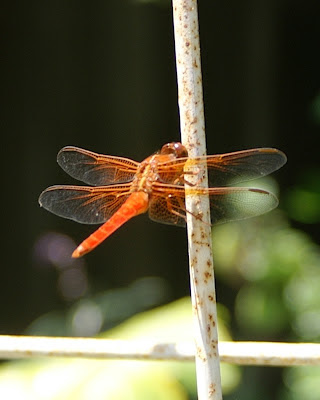 A mating pair of flame skimmers (Libellula saturata) flew by my head as I was moving the hose among the still-thirsty rudbeckia.  Well maybe only one of the pair was flying as is often the case when dragonflies are either in tandem (the male clasping the female behind her head and appearing to have her in tow) or mating (the female has curled the tip of her abdomen around and up to the male's "secondary sex organ" located just behind his legs).  Anyway, the heart-shaped conglomerate of this mating pair flew by then alit.  Sadly, by the time I returned with the camera they had separated.

But a male and female flame skimmer were hanging around the yard when I showed up with the camera.  Of course I can't be sure these were the mating pair:  it's also likely in the competitive world of dragonfly reproduction this is a second male that would like to mate with the same female. 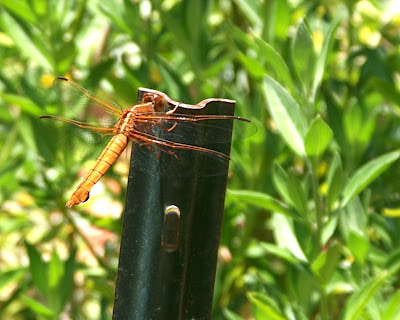 The female is larger, with a thicker abdomen and of course female genitalia (ovipositor) and less brightly colored.  She is seen her resting on a steel fence post.

The male has a thinner darker colored abdomen and darker more colorful wings seen in the top photo.  In this next photo you can see the "secondary sex organ" mentioned above, which is the penis and sperm repository. 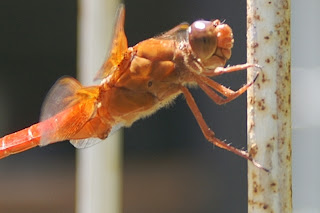 I found a lot of interesting insights into dragonfly mating behaviors in this National Geographic article.

Not sure if dragonflies are friendly, but this one gave me a facial expression that seemed jocular as I signed off. 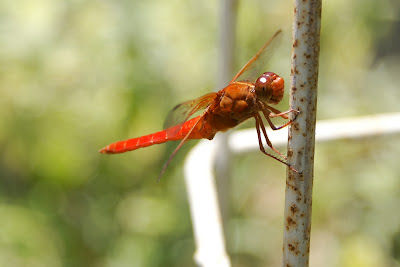 i love dragonflies...and think they have the CUTEST little faces...

Looks like those dragonflies are enjoying their fly. Nice photo!