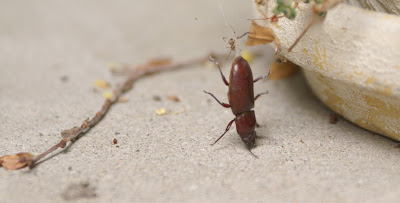 Nuts.  I failed, I am such an amateur.
Sure, I noticed this beetle suspended in its small way from a pot rim on my porch.

I came down to its level for a closer look and saw it was caught up in spider silk.
And then saw the spider. 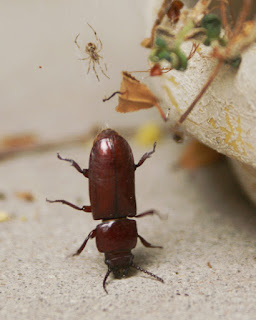 Watched the spider approach its comparatively enormous prey from the ventral aspect and
inject venom. Probably between abdominal segments.
The beetle struggled, flexing and spinning for a few seconds then stilled.
I snapped a few photos. 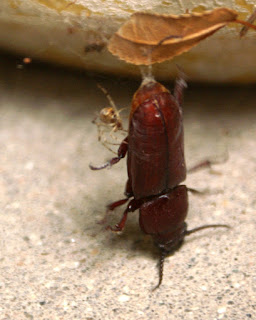 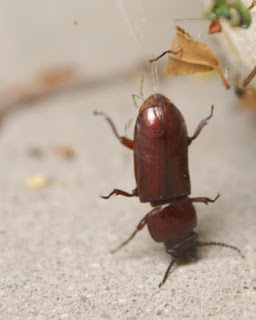 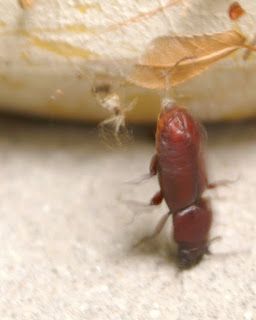 But,
I neglected to count the segments on the beetle's antennae
(looks like 11 in the photos, 11 beadlike segments).
It didn't occur to me to take note of the beetle's tarsal formula:
was it 5-5-5 ( five segments on each of the tarsi fore middle and hind )
or was it 5-5-4?
Or whether there were cleaning combs on the foreleg spurs.

Darkling (tenebrionid) or ground (carabid) ?
Maybe there's some subtle difference in flavor between these two large beetle families, and
I could ask the spider to weigh in here for a positive ID.
Or next time, just be a little more systematic in my observations. 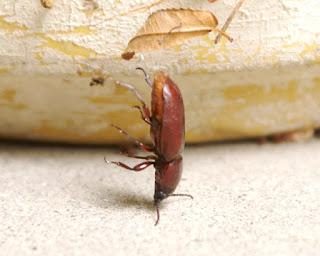